skip to main | skip to sidebar

The Tidal Bore is Aptly Named

#1: There are two photos in this morning's paper that capture our attention, because they are taken in two places we think of as home. One is a photo of people lining a beach in protest against offshore oil drilling—taken on . We are sure that some of our friends are in the picture, even though they are too small to identify. The other photo is of Dorothy Height--civil rights activist and President of the National Council of Negro Women for forty years—standing in front of an exhibit about her at , where we worked together years ago. We think it quite extraordinary that this Canadian paper is hitting us so close to home. We can't imagine someone from sitting down to breakfast with the Savannah Morning News or the Cincinnati Enquirer and finding a mention of their home town. Most days, there wouldn't even be a mention of their country.

#2: Jim hands me an article from this morning's Chronicle Herald that I somehow missed. It notes that there are a number of cities and towns named the world over where the residents are content to be known as Halifaxians, but the citizens of in insist that they are Haligonians. The story describes the research a member of the Canadian Society of the Study of Names conducted to determine the origin of this "distinctive denonym" and to get to the bottom of this "onomastic discrepancy." More interesting to me than his research is the use in one newspaper article of multiple words that I have never come across in my prior reading of newspapers or study of the English language.

"If one took all the rivers in the world and measured how much water they discharged into the surrounding bays and oceans, it would equal the amount of water that moves in and out of twice a day."

We read this mind boggling fact at the near . A tidal bore is a rush of water brought in by the incoming tide going upriver to the Bay meeting the current of the river leaving the bay. Promotional brochures for the phenomenon would have one believe that a virtual wall of water forms where the tide and current collide, and that the drama of the event is breath-taking.

The Rest of the Story is a Bore:

Since we get to the early, Dick is able to determine that we could see the tidal bore three times today. We could go downriver, and see it pass an observation area there, then race it back to the Information Center Observation Area, and see it again, then go further upriver, and watch it once more. We drive to the first spot, where broad banks of red mud slope down to a tiny trickle of a river. We watch about a dozen people suited up in yellow foul weather gear suits walk down to motorized rafts sitting at the edge of the river. They get in their rafts and wait for the bore to arrive and provide them with a thrill ride akin to white water rafting. They have paid a lot of money for this adventure. Three bald eagles are sitting on the river bank also eagerly awaiting the arrival of fish surfing the bore. 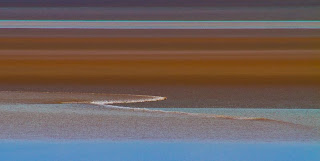 Finally, we see a wave approach. About a foot or \so high, it rapidly makes its way upriver, lapping the shore and leaving little swirls and whirls of confused currents in its wake. We are glad we didn't pay to raft those gentle "rapids"!

Figuring that this first stop is just a slow spot and maybe the bore will pick up some steam at the official Observation Area, we go back to watch the bore there. While we are standing around for a long time looking at nothing happening, Dick talks with an expert researcher with a big notebook full of data, who tells him about the opposite effects of the full moon and the moon in perigee on the strength of the tidal force and a lot of other mumbo jumbo, but, simply put, the tidal bore is, yet again, a bore. We decide to forego the third viewing opportunity.

We Save the Best for Last:

Fortunately, the morning newspaper also provided us with an idea for one more thing to do in besides watch the boring bore. A story reported that vandals had beheaded a tree sculpture of a beloved church organist, 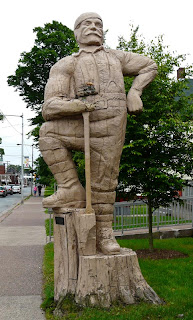 and went on to explain that there are 32 sculptures in the town carved from the massive trunks of trees that were over 100 years old before they were stricken by Dutch Elm Disease.

Intrigued, we stop in the , and get a booklet with a driving tour map of all the sculptures, and a page with information about each one. Each sculpture is sponsored by a local business or organization to honor a person or cause. A Mountie stands in front of the R.C.M.P. station honoring a fallen comrade; a beloved contralto who once sang for the Queen stands in front the church where she sang in the choir. There's a lumberjack, a gifted local athlete who went on to play professional hockey, and a bearcat—the mascot of the local hockey team.

We especially like the story behind this sculpture of John Glassey. Our booklet tells us he was Mayor of Truro for 24 years; served for more than 42 years on the Fire Brigade (including six years as Chief); was active in, and served as president of, the Rotary Club and United Way; 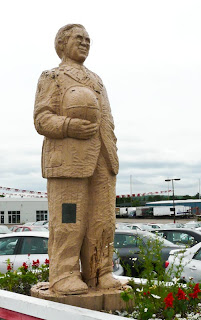 and won tons of awards and honors. His car dealership was a longtime landmark, and his statue, sponsored by the Rotary Club, stands in front of a car dealership that now bears someone else's name.

In driving around looking for the sculptures we get a great little tour of the town and a unique insight into its values.

Once again, the highlight of our day is not as we planned it. But, somehow, every day turns out to have at least one highlight.

Posted by Vagabond Glovers at 9:42 PM